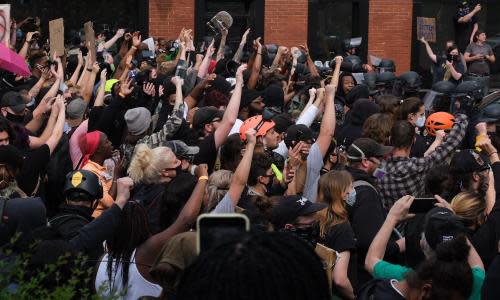 Anger erupted on Wednesday when a grand jury brought no charges against Louisville police for the killing of Breonna Taylor during a drug raid gone wrong.

Prosecutors in Kentucky said that two officers who fired their weapons at Taylor were justified in using force to protect themselves.

The only charges brought by the grand jury were three counts of wanton endangerment against fired officer Brett Hankison for shooting into the homes of Taylor’s neighbors during the raid on the night of 13 March.

Hankison was not charged for shooting Taylor.

The lawyer Ben Crump said on behalf of Taylor’s family that the grand jury’s decision was “outrageous and offensive”.

Taylor, 26, who was Black and worked as an emergency medical technician, was shot at home in March and protests for justice over her death, and against police brutality have spread around the US and beyond.

Crowds in Louisville reacted with dismay to the announcements by the Kentucky attorney general, Daniel Cameron, on Wednesday afternoon and marched downtown where protests were ongoing, amid a high police presence.

Police were seen arresting a few protesters, though it was unclear for what reason.

Some protesters were ordered by police to disperse and officers said one gathering on a street corner outside downtown was “unlawful” and threatened to use chemical agents and make arrests if people did not leave.

Footage on social media showed several white men also in the downtown area with guns and wearing body armor, identifying them as some sort of militia.

The mayor has ordered a curfew in the Kentucky city for 9 pm.

Crowds first gathered in a park in downtown Louisville, where there have been protests every day for months. Someone screamed out in anguish at hearing the news of the charges and people wept, before they began to march. “I’m more saddened than angry,” Monique Lathon, 33, who was there with her young daughter, told the Guardian.

David Mour, 59, a lawyer who represents many activists, stood solemnly as the crowd took in the news. “I have had clients indicted for way less,” he said. The civil rights leader Al Sharpton said the charges were “grossly insufficient”, in an interview on MSNBC.

Taylor was killed on 13 March by white police officers in Louisville serving a so-called “no-knock warrant” that allowed them to charge into her apartment without warning as part of an investigation into an ex-boyfriend, who was not present.

The other two officers with Hankison on the night, Jonathan Mattingly and Miles Cosgrove, fired their weapons inside the apartment after her boyfriend Kenneth Walker fired one shot as they entered. They did not announce themselves as police and he said he believed they were intruders.

One officer was shot in the leg and police fired in return.

Criminal justice experts had said ahead of the grand jury announcement that a tangled legal doctrine in Kentucky meant a form of self-defense stalemate left questions over what charges a prosecutor could bring against the officers.

Cameron, the attorney general, said in a press conference in the state capital, Frankfort, “there is no doubt this is a gut-wrenching” outcome of the case for many.

Downtown streets in Louisville, about 50 miles from Frankfort, have been closed off all week as the city awaited the announcement. The Louisville mayor, Greg Fischer, said before the press conference that the city will observe a curfew for at least the next three nights, from 9pm to 6.30am, starting on Wednesday.

The officers opened fire after, Mattingly told investigators, they burst into the apartment and saw a man and a woman at the end of the hallway, following which Walker fired one shot that hit Mattingly in the thigh. The police officers then opened fire. Hankison fired from outside the bedroom where Taylor died.

Cameron said the loss of Taylor’s life was a tragedy. “I know that not everyone will be satisfied by the charges today,” he said.

He added: “I understand as a Black man how painful this is … my heart breaks for the loss of Miss Taylor.”

Louisville was placed under a state of emergency Tuesday as city officials closed down a more than 25-block perimeter to traffic. Most city administrative buildings and other businesses were boarded up in anticipation of the decision.

Protests in Louisville related to Taylor’s death in March have been taking place for more than 100 consecutive days and have been overwhelmingly peaceful.

Last week the city of Louisville reached a $ 12m settlement with Taylor’s family in a civil suit stemming from the shooting. The city has also agreed to policing reforms including a requirement that commanders approve all search warrants before they go to a judge.

The California senator and Democratic vice-presidential nominee Kamala Harris has called for the Department of Justice to investigate Taylor’s killing.

The progressive congresswoman Alexandria Ocasio-Cortez said the latest news in the case was “weighing really heavy on my heart”.

Ocasio-Cortez told a Capitol Hill reporter, “We know that her death is not just the result of one person but the system, structure and department that failed their entire community.”

The wave of laws will have effects big and small, ranging from legalized marijuana to an end to cash bail

Ralph Lauren to lay off 3,600 workers after coronavirus hit