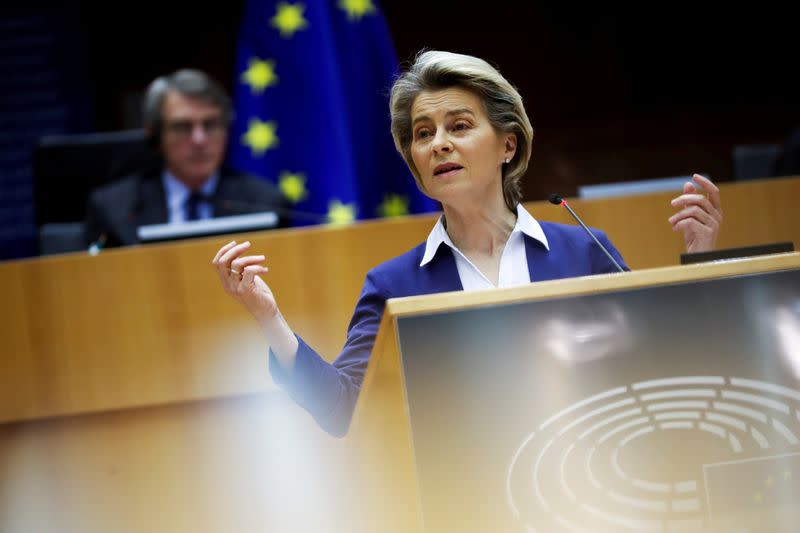 BRUSSELS (Reuters) – EU lawmakers questioned chief executive Ursula von der Leyen for hours on Tuesday over the slow rollout and shortage of COVID-19 vaccines as she took responsibility for an export control plan that angered Britain and Ireland.

Three groups in the European Parliament on Tuesday evening grilled Von der Leyen, a German who tweeted and appeared only on German television in the first few days after the bloc imposed curbs on vaccine exports on Friday.

Another parliament session was set for Wednesday morning, and the groups want the EU president to appear before a full session of parliament next week.

The COVID-19 vaccine crisis, which came to a head with the EU export controls, followed news that AstraZeneca would cut its supply of vaccines to the bloc until March by 60% due to production problems.

Even with the addition of an extra 9 million doses that von der Leyen announced on Sunday, the shortfall is at least 50%.

Questions still surround the Commission’s decision – swiftly reversed – to invoke Article 16 of the Brexit agreement’s Northern Ireland protocol. The move, part of the EU’s effort to boost vaccine supply for its member states, would have set up border checks on the island of Ireland.

Von der Leyen accepted responsibility for Commission acts and decisions, a person at one of Tuesday’s meetings said.

The European Commission president repeated to lawmakers arguments she made to newspapers as she sought to defuse criticism over the slow start to COVID-19 vaccinations and outrage over the border checks issue.

Asked by the Irish Times if she would apologise, von der Leyen said she regretted that Article 16 was in a “provisional version” of the decision, but said the EU executive had been “quick on its feet” to find another solution.

Dacian Ciolos, president of the liberal Renew Europe group, said mistakes could have grave consequences. “We have no margin for error in this process. Not only does the credibility of the EU and in particular the European Commission depend on it but also the health and wellbeing of our citizens,” he said in a statement.

Sophie in ‘t Veld, a Dutch liberal lawmaker, said von der Leyen was relying on too narrow a circle of advisers.

“She’s made a couple of big fat mistakes. Article 16 was one,” she told Reuters, adding that her tendency to speak only to German media was another problem.

EU countries have so far given first doses to about 3% of their populations, compared with 9% for the United States and 14% for Britain, according to Our World in Data.

Von der Leyen said the EU had lagged rivals by three to four weeks because of a more rigorous approvals process. Supply problems should ease in the second quarter of 2021, but increasing production remained a challenge.

Amazon senior manager: “There’s a problem with the culture and with practices”