More than 16,000 people have demonstrated in Thessaloniki against the government’s economic policies and in opposition to a controversial planned name deal with neighbouring Macedonia. 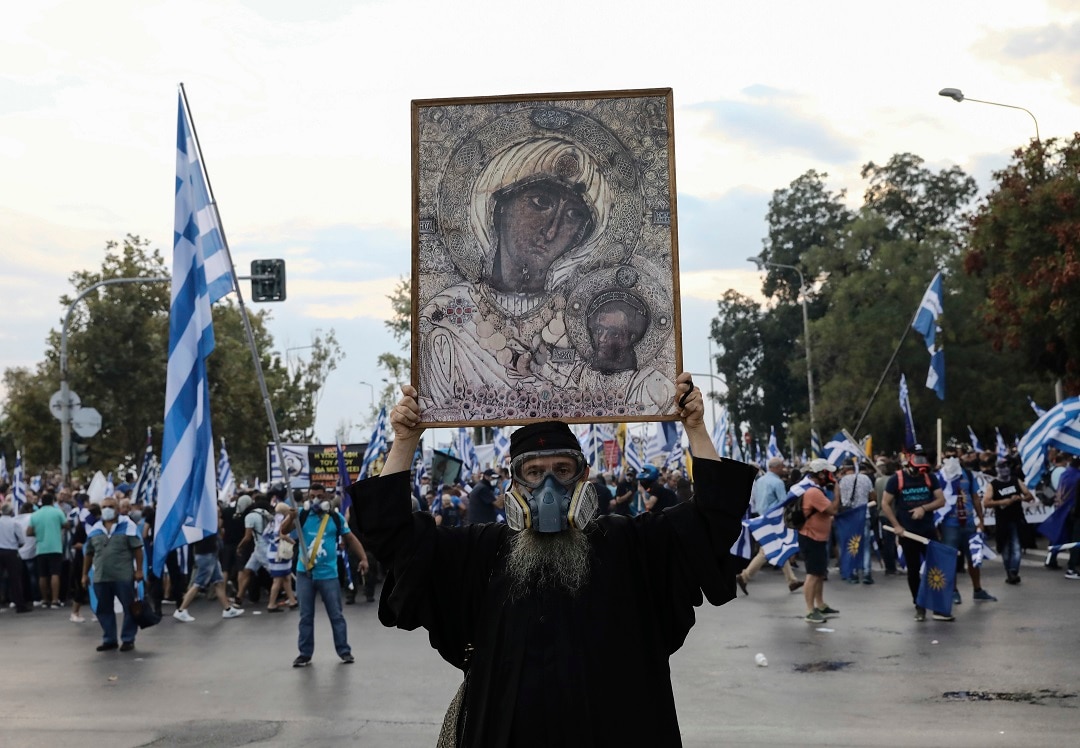 An Orthodox monk wearing a mask raises an icon during clashes with police at the northern Greek city of Thessaloniki.

A preliminary agreement, to be confirmed by a referendum by Skopje later this month and a Greek parliamentary vote early in 2019, will see the Balkan state renamed the Republic of North Macedonia.

The tiny landlocked country had joined the United Nations in 1993 as the Former Yugoslav Republic of Macedonia.

Greece also has a northern province named Macedonia, the heart of Alexander the Great’s ancient kingdom, and many Greeks fear the deal will officially enable Skopje to lay claim to their cultural heritage.

Tsipras on Saturday insisted that Thessaloniki should act as a “cultural bridge, not a fence.”

“Thessaloniki does not deserve misery, intolerance, fear, hatred and discord,” he said as he promised to donate state land for a new stadium for PAOK, the city’s most popular sports club.

The protesters, many of whom were waving Greek flags, were shouting “Greece, Greece, Macedonia” and “traitors”.

They also hurled insults at Tsipras and demanded he resign. Opposition parties and unions dispute that the end of Greece’s third bailout last month leaves much cause for celebration.

“(Greeks) believe that austerity is not over. All that has ended is the obligation of creditors to give the country money… and a tough tutelage remains,” said Yiannis Panagopoulos, head of Greece’s leading union GSEE.

Unemployment has fallen below 20 percent for the first time since 2011, but most Greeks continue to struggle under heavy taxation and drastically reduced income.

'They're scared': parents back child climate activists with hope