Former UN chief and Nobel peace laureate Kofi Annan died on Saturday at the age of 80, his foundation announced, prompting a barrage of grief-stricken tributes from around the world.

The Ghanaian national, who lived in Switzerland, was a career diplomat who projected quiet charisma and was widely credited for raising the world body’s profile in global politics during his two terms as UN chief from 1997 to 2006.

The first secretary general from sub-Saharan Africa, Annan led the United Nations through the divisive years of the Iraq war and was later accused of corruption in the oil-for-food scandal, one of the most trying times of his tenure.

“It is with immense sadness that the Annan family and the Kofi Annan Foundation announce that Kofi Annan, former Secretary General of the United Nations and Nobel Peace Laureate, passed away peacefully on Saturday 18th August after a short illness,” the foundation said in a statement.

It is with immense sadness that the Annan family and the Kofi Annan Foundation announce that Kofi Annan, former Secretary General of the United Nations and Nobel Peace Laureate, passed away peacefully on Saturday 18th August after a short illness… pic.twitter.com/NDOy2NmAAs

“His wife Nane and their children Ama, Kojo and Nina were by his side during his last days.”

According to Swiss news agency ATS, he died in a hospital in the German-speaking part of the country.

Current UN chief Antonio Guterres voiced deep sadness at the news, describing his predecessor as “a guiding force for good”.

“In many ways, Kofi Annan was the United Nations,” he said.

“He rose through the ranks to lead the organisation into the new millennium with matchless dignity and determination.

“Like so many, I was proud to call Kofi Annan a good friend and mentor.” 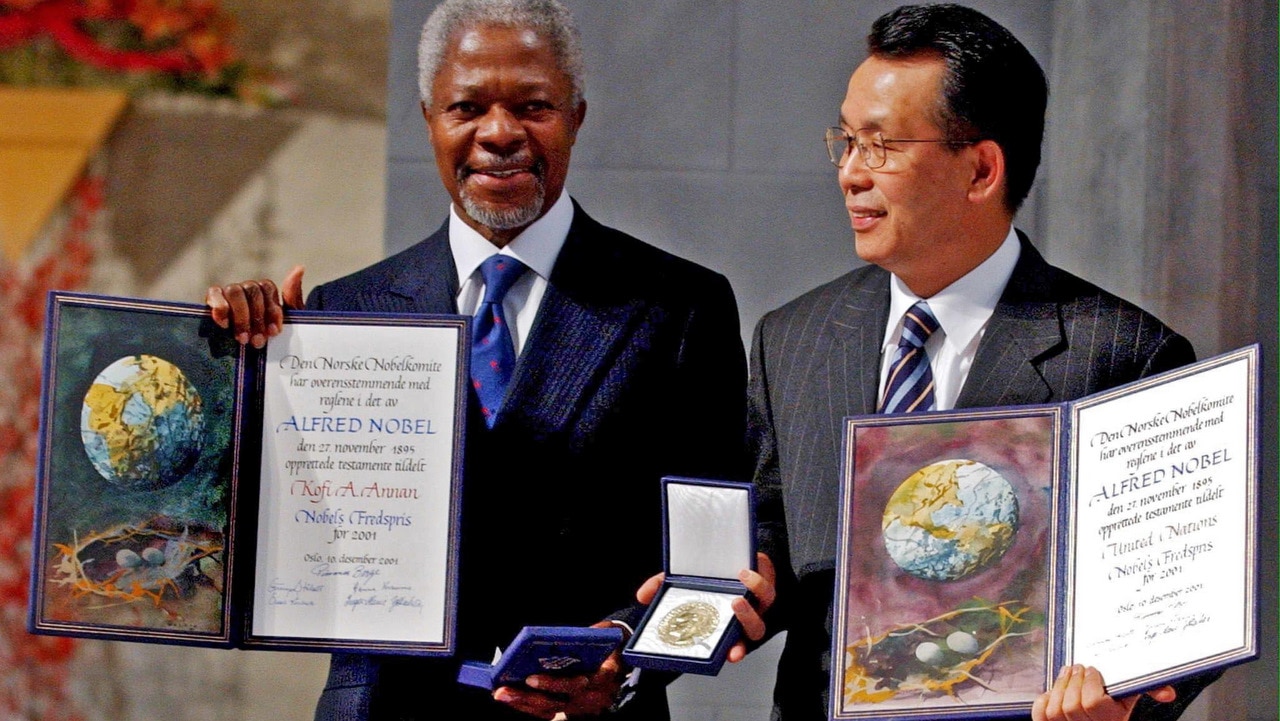 Ghana’s President Nana Akufo-Addo announced that the national flag will fly at half-mast at home and in the country’s diplomatic missions across the world for one week in honour of “one of greatest compatriots”.

In 2001, as the world was reeling from the September 11 attacks in the United States, Annan was awarded the Nobel Peace Prize jointly with the world body “for their work for a better organised and more peaceful world”.

But his tenure was tarnished by a 2005 investigation of Annan and his son over the oil-for-food scandal, seen by some as as payback for his comments that the 2003 US-led invasion of Iraq was “illegal”. Kofi Annan receives a sash as he is conferred the Doctor of Humane Letters degree from Georgetown University.

A commission of inquiry cleared Annan of any serious wrongdoing, but found ethical and management lapses linked to his son Kojo’s ties with a Swiss firm that won lucrative contracts in the oil-for-food scheme.

Annan later admitted that the scandal had sorely tested his mettle not only as secretary-general, but as a father.

Despite the lows, he left the post as one of the most popular UN leaders ever, and was widely considered a “diplomatic rock star” in international diplomatic circles.

Born in Kumasi, the capital city of Ghana’s Ashanti region, Annan was the son of an executive of a European trading company, the United Africa company, a subsidiary of the Anglo-Dutch multinational Unilever.

After ending his second term as UN chief, Annan went on to take high-profile mediation roles in Kenya and in Syria.

He enjoyed some success in ending post-election turmoil in Kenya in 2007 but he resigned from the peace mission for Syria in 2012. 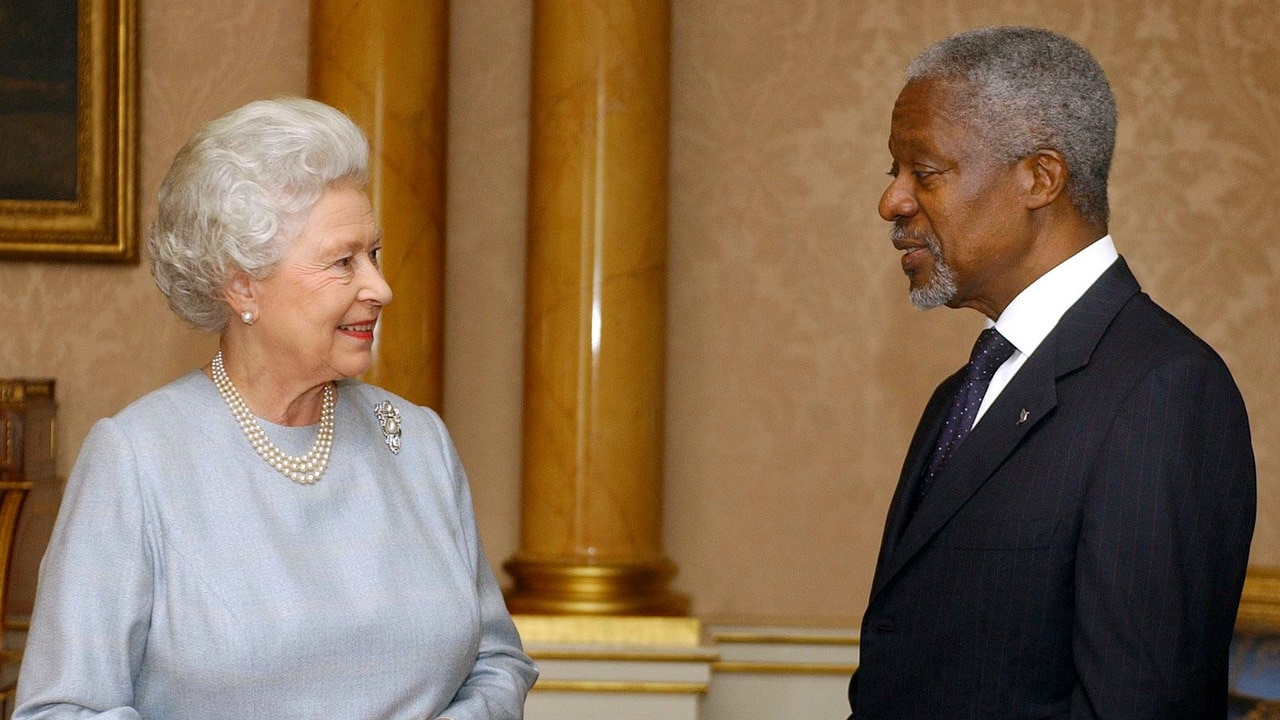 Annan complained that divisions among world powers at the Security Council had turned his job as Syria envoy into a “mission impossible.”

He later set up a foundation devoted to conflict resolution and joined the Elders group of statesmen which regularly speaks out on global issues.

The group, founded by anti-apartheid icon Nelson Mandela, said it was “shocked and deeply saddened” by Annan’s death.

‘One of the world’s giants’

“Kofi worked unceasingly to improve the lives of millions of people around the world. While we mourn his passing today, we resolve as Elders to continue to uphold his values and legacy into the future,” deputy chair of the group Gro Harlem Brundtland, a former Norwegian prime minister and former head of the World Health Organization, said in the statement.

“His warmth should never be mistaken for weakness. Annan showed that one can be a great humanitarian and a strong leader at the same time,” NATO chief Jens Stoltenberg, another former Norwegian prime minister, said in a statement.

“The UN and the world have lost one of their giants,” he said.

“Kofi was humanity’s best example, the epitome, of human decency and grace. In a world now filled with leaders who are anything but that, our loss, the world’s loss becomes even more painful,” he said.

“He was a friend to thousands and a leader of millions.”

The measure clears the way for Democrats to pass Biden’s $1.9 trillion relief package without the threat of a GOP filibuster