A refugee calling from Manus Island has told a rally in Melbourne he’s suffering in a state of limbo as thousands gathered around Australia to protest the government’s treatment of asylum seekers.

More than 1000 people stopped traffic in the heart of Sydney on Saturday, while about 500 protesters in Melbourne rallied against the federal government’s offshore detention centres. Father Rod Bower addresses a rally to call for an end to the refugee crisis on Nauru and Manus Island.

The asylum seeker told the Melbourne protest he, and those with him, had experienced five years of suffering and hopelessness.

“We need action. We need to move away from this state of limbo,” he said.

Another said the situation was getting worse every day.

Among the crowd in Sydney was Australian rock icon Jimmy Barnes, who said he felt compelled to bring his family to Hyde Park and rally against offshore detention.

Children appeal to the PM to get the kids off Nauru.

“The behaviour of our government and the government before it, our politicians, have been disgusting.”

Mr Barnes said he was worried Australia was becoming “a joke” on the world stage.

“My friends in America, they’re all fighting their own demons with Trump, but they all look and say ‘man your human rights record is worse than ours’,” he said. 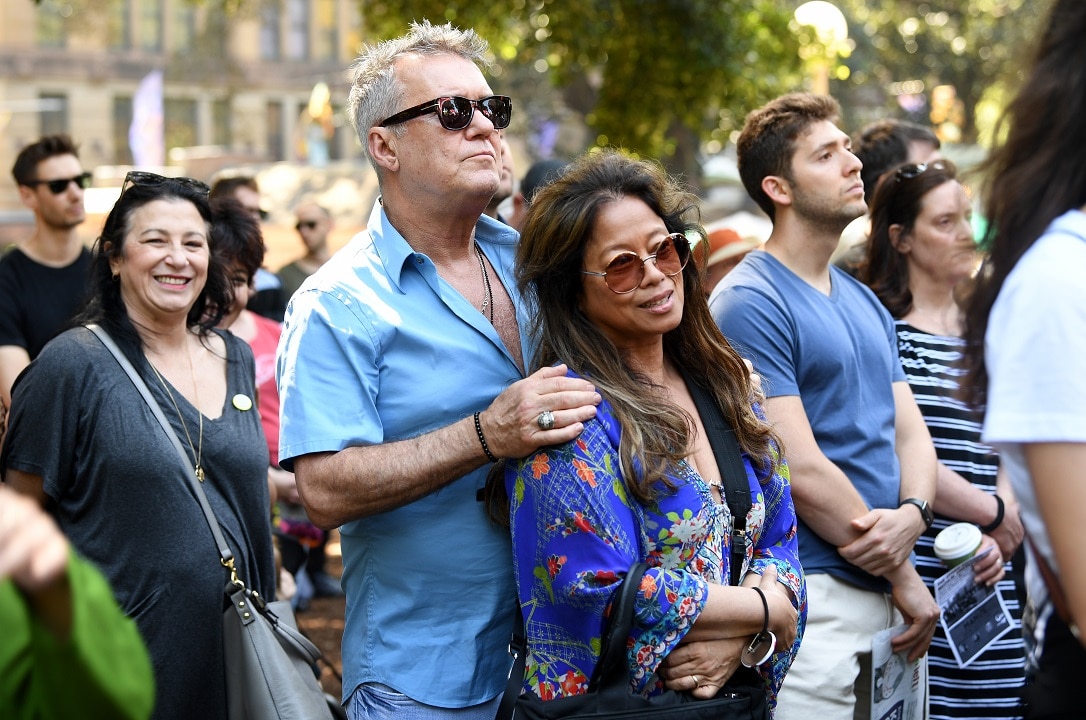 “We should stand back as a country, the lucky country, and say ‘how can we help?’ Not be afraid.”

In Melbourne, Refugee Action Collective co-chairman David Glanz said he and others felt they’d been hitting their heads on a brick wall.

“You ask yourself how we can be in a situation where children are resigning themselves to death under the so-called protection of the Australian government,” he told hundreds of supporters.

“Well today I think we can say we are beginning to see the cracks in that wall.”

The health of asylum seekers on Nauru has shot to prominence in the past few weeks, with Scott Morrison under immense pressure to bring sick children and their families to Australia.

Eleven children were evacuated earlier this week, leaving 52 on the island.

Refugee advocates say another four kids have since left Nauru.

Mr Morrison said about 30 people had been taken off Nauru over the last few weeks.

“Those numbers have been coming down and we will continue to work on that,” Mr Morrison told reporters in Sydney.

“We have just been getting on and doing it like a responsible and compassionate government should.”

Federal Labor MP Anthony Albanese said ahead of Saturday’s rally that Australia could have strong borders “without losing our national soul”.

“The government isn’t moving fast enough… these are just little kids and they deserve, I think, a bit of compassion and a bit of common sense,” he told reporters in Melbourne.

He called on the government to immediately take up an offer from the New Zealand government – first made to Labor in 2013 – to accept refugees from those locations.

It can be done without special legislation to stop those who settle in New Zealand from then moving to Australia, he said.

Manhunt after NSW mum found dead in her home