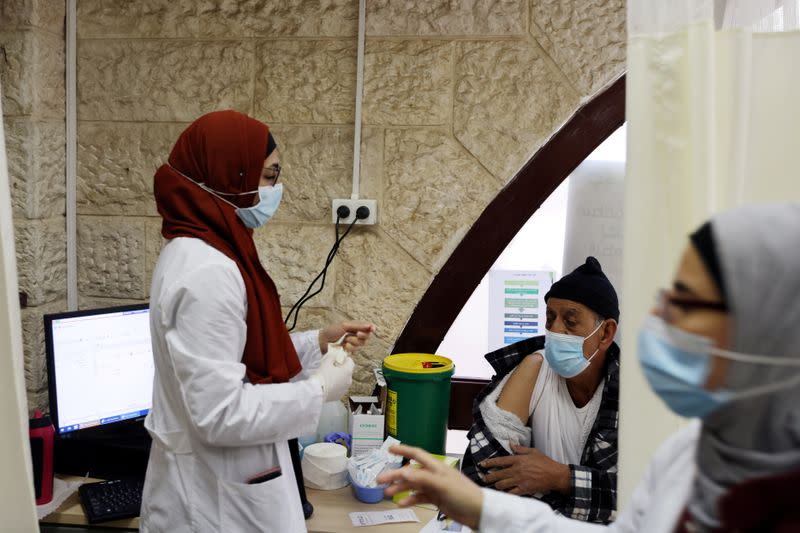 JERUSALEM (Reuters) – Israel tightened a national lockdown on Friday in a bid to curb a sharp rise in new COVID-19 cases, with Prime Minister Benjamin Netanyahu promising that all Israeli adults could be vaccinated by the end of March.

With a population of nine million, Israel is leading the world in a swift rollout of vaccinations, but the number of new infections has climbed to around 8,000 a day, the highest in months.

Israel imposed its third lockdown on Dec. 27. Many Israelis, however, ignored travel and social-distancing restrictions, prompting stricter measures that will include additional police roadblocks and the closure of most schools and more businesses.

The new edicts will be in effect for at least two weeks.

In a speech on Thursday, Netanyahu said vaccine supply agreements with Pfizer Inc meant that all Israelis over the age of 16 would be able to be inoculated by the end of March, or perhaps even earlier.

Israeli officials have said they hoped Israel could emerge from the pandemic as early as February if the vaccination programme, launched on Dec. 19, maintains its speed.

“As part of the agreement (with Pfizer), we agreed that Israel would serve as a model nation, a model for the world in the swift vaccination of an entire country,” Netanyahu said in his address, promising accelerated shipments.

Progress towards meeting the vaccination goal could help Netanyahu in a parliamentary election on March 23, Israel’s fourth in two years.

According to government and central bank estimates, the tightened lockdown will cost the economy as much as 4.0 billion shekels ($ 1.3 billion) a week.

On Thursday, Israel received its first shipment, some 100,000 doses, of Moderna Inc vaccines.

Some 17.5% of the population – and 70% of citizens aged 60 or older – have received their first shots of the Pfizer vaccine, with second-round inoculations set to begin on Sunday.

The main hold up was over the extension of the $600-a-week federal unemployment enhancement, sources say

This site may earn affiliate commissions from the links on this page. Terms of use. Apple’s new Watch SE comes