Prime Minister Scott Morrison will spend the weekend looking at which fresh talent to promote and experienced hands to keep on his frontbench, as he takes over from Malcolm Turnbull.

Mr Turnbull stepped down from the Liberal leadership on Friday, after 43 of his colleagues signed a petition calling for a spill to end a week of what he described as an “insurgency” led by conservatives Peter Dutton and Tony Abbott.

Some of the signatories were not supporters of Mr Dutton – who lost an initial spill on Tuesday but did not give up – and merely wanted to clear the air.

Mr Morrison also grouped himself among those who remained loyal to Mr Turnbull but threw his hat in the ring when the leadership was vacated.

The new leader will be looking to freshen up the cabinet and wider ministry, with one position already filled – that of treasurer, which has been handed to Liberal deputy leader Josh Frydenberg. 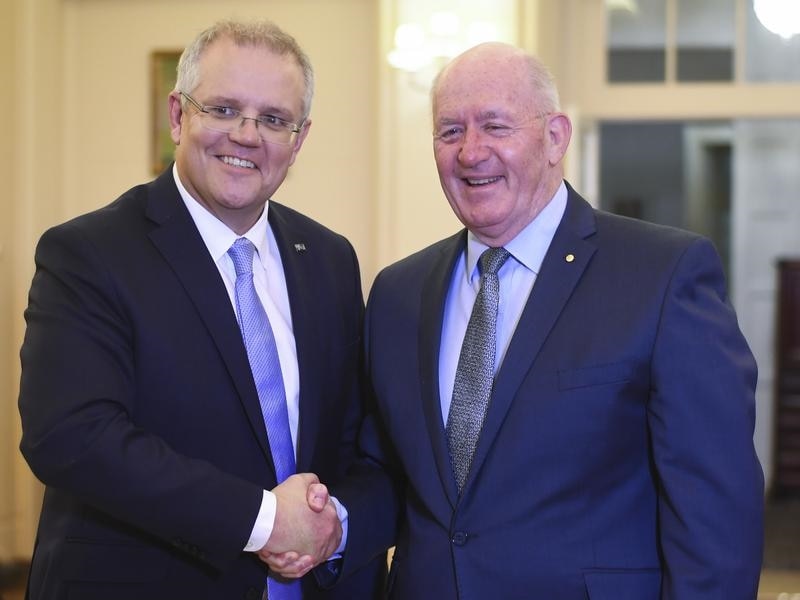 New prime minister Scott Morrison says not to expect a general election until next year. (AAP)

Mr Frydenberg, Mr Morrison and Nationals leader Michael McCormack – whose party is entitled to five cabinet posts – will discuss the line-up ahead of an expected swearing-in early next week.

Mr Dutton, who resigned as home affairs minister this week, will be offered a return to the ministry as will Foreign Minister Julie Bishop.

But it is expected Ms Bishop, the former deputy leader, will go to the backbench and retire at the next election after 20 years in parliament.

Mr Morrison has made the drought a priority, with health care, small business and electricity prices also on his list.

The Liberal Party faces weeks of rebuilding after the infighting which has resulted in the toppling of Malcolm Turnbull and elevation of Scott Morrison as prime minister.

Mr Morrison may be in for an early electoral test with Mr Turnbull’s retirement expected to trigger a by-election in the Sydney seat of Wentworth.

However he said he relished the chance to campaign on his new theme of being “on your side”, referring to voters disgruntled over the recent political circus.

He told reporters not to expect a general election until it is due in the first half of 2019.

Mr Morrison said he would head a “new generation of Liberal leadership”.

Florida shooter with history of problems bought his AR-15 legally