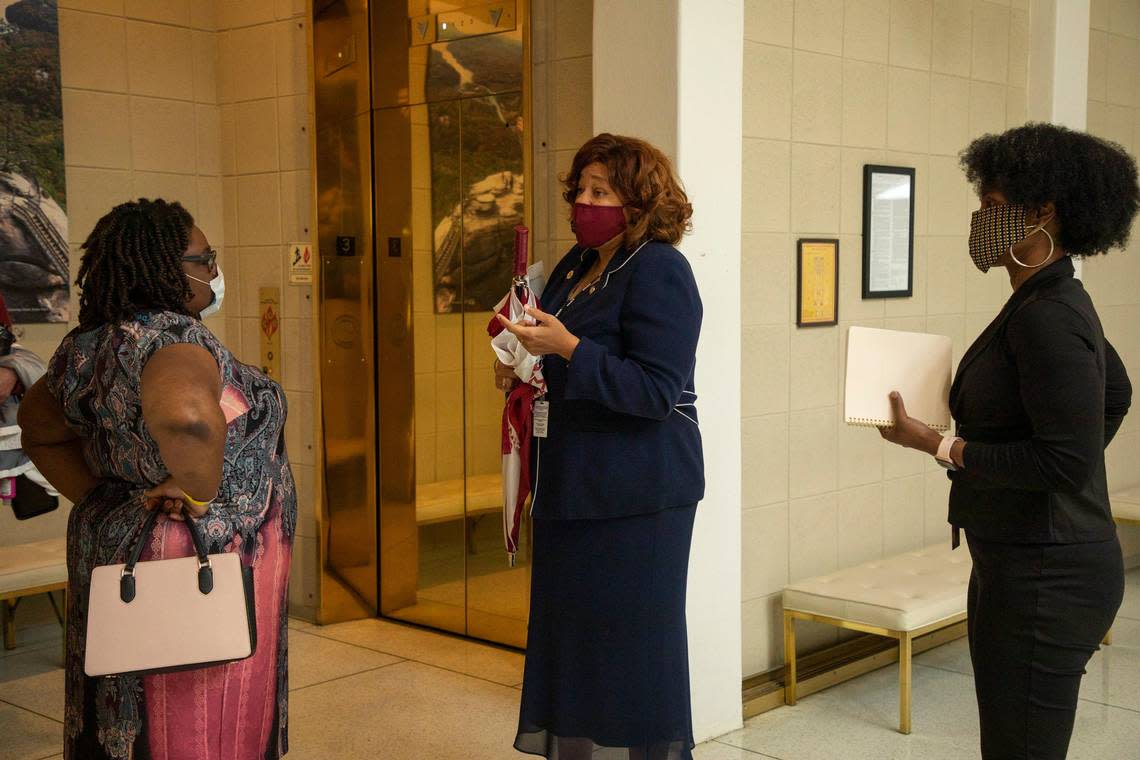 North Carolina U.S. Senate candidate Erica Smith is involved in an ongoing lawsuit alleging that when Smith was a high school varsity volleyball coach, several players sexually assaulted at least two fellow teammates while Smith and the team were on their way back from a game.

One of the teammates who said she was assaulted is suing Smith and another coach for gross negligence, Virginia court records show. The accuser was 13 years old at the time of the assault.

One student pleaded guilty to criminal charges in the assault in Sept. 2014, according to court documents.

The lawsuit, which was initially filed in 2015, alleges that on Aug. 26, 2013, Smith was on a school bus traveling home with the team from Virginia’s Eastern Shore when five or six players sexually assaulted “one or more teammates” and the plaintiff in the lawsuit.

Smith, then a chemistry and algebra teacher at City of Franklin Public Schools in Virginia, and the other coach were present on the bus. The lawsuit says the coaches “did nothing to respond to or stop the first sexual assault(s) and did nothing to protect the players, including Jane Doe, from further assaults on the bus.” Jane Doe is a pseudonym used for the plaintiff in the case.

The News & Observer generally does not identify victims of sexual assault.

“As someone who has endured sexual misconduct herself, Erica’s heart is with anyone who has survived sexual assault or harassment,” Smith’s campaign said in an emailed statement to The News & Observer Friday morning. “She believes deeply that we should live in a society where every little girl can grow up free from fear of abuse, harassment, and violence.”

“We’re confident that once reviewed by the legal system, the case will be dismissed,” Smith’s campaign said.

Smith originally ran for the U.S. Senate in 2020, but lost in a primary election against fellow Democrat Cal Cunningham, who in turn lost the general election to incumbent Sen. Thom Tillis after a sex scandal involving Cunningham made headlines.

One or more of the plaintiff’s other teammates was assaulted first, the lawsuit says. Then the group of “five or six” teammates attacked the plaintiff, according to the complaint.

The assault on the plaintiff was noisy and caused a commotion, and at one point, one player held up a cell phone, illuminating the scene, court filings allege.

Smith and the other teacher “sat just rows away from the assault and did nothing to intervene and protect” the plaintiff, the lawsuit says.

Smith resigned from her job at Franklin City Public Schools in June 2014, less than a year after the incident, according to the school district.

Less than three months later, then 18-year-old Aerial Darden, the volleyball team captain, pleaded guilty to one misdemeanor and one felony count of sexual battery, according to news reports and court records.

In 2015, one year after Darden pleaded guilty, the parents of the accuser filed the lawsuit against Smith, who was then in her first term as an N.C. state senator. At the time, Smith went by Erica Smith-Ingram.

A trial was scheduled in 2018, but the accuser and her parents voluntarily dismissed the case, records dated January 2019 show. She refiled the lawsuit in July 2019, the same month Smith announced her candidacy for 2020 U.S. Senate race.

“Years ago, we were prepared to try the case when on the day of the trial the plaintiff voluntarily dismissed the case resulting in a non-suit,” Smith’s campaign said in its statement.

One day after the plaintiff filed a brief in opposition to those dismissals, Smith officially filed for her 2020 candidacy. The case is ongoing, and no action has been taken in the case since November 2019.

Reached by phone Tuesday, the plaintiff’s attorney, James J. Reid of Newport News, Virginia, declined to comment on the case.

Smith is currently a curriculum and instructional specialist at Haliwa-Saponi Tribal School in Hollister.

In spring 2020, she filed an ethics complaint against some of her N.C. Senate colleagues, most fellow Democrats, The News & Observer reported. The complaint included accusations of sexual harassment and bullying. The internal Legislative Ethics Committee dismissed the complaint.

With the start of the new year and a new legislative session, The News & Observer has launched a new Under the Dome podcast. We’re unpacking legislation and issues that matter to keep you updated on what’s happening in North Carolina politics twice a week on Monday and Friday mornings. Check us out here and sign up for our weekly Under the Dome newsletter for more political news.

For more North Carolina government and politics news, listen to the Under the Dome politics podcast from The News & Observer and the NC Insider. You can find it on Spotify, Apple Podcasts, Stitcher, iHeartRadio, Amazon Music, Megaphone or wherever you get your podcasts.

The DOJ inspector general says he’s still investigating possible FBI leaks to Trump’s attorney and others before the 2016 election, but the case may be hard to prove

The doctor is in

Hasselblad X1D II 50C: out of the studio and into the streets