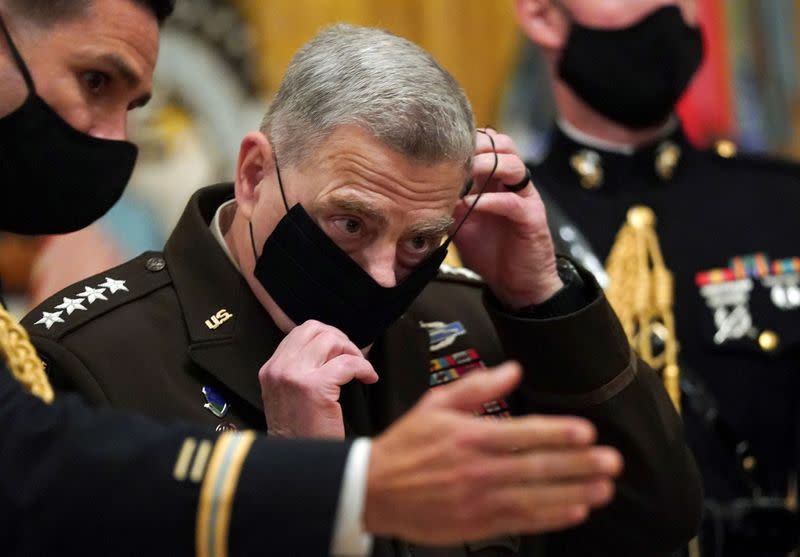 WASHINGTON (Reuters) – The top U.S. general on Thursday suggested he favored an overhaul of a longstanding military policy that sends thousands of family members to live with forces deployed overseas in select locations including South Korea and Bahrain.

Any sudden decision to stop sending U.S. military families to South Korea, home to 28,500 troops, could stoke anxiety across the border in North Korea, which would likely see it as increasing American readiness for conflict.

Similarly, any abrupt move to pull relatives of U.S. military members from Bahrain, site of the U.S. Navy’s Middle East headquarters, would raise concerns in nearby Iran.

U.S. Army General Mark Milley, chairman of the Joint Chiefs of Staff, said it was time for a more methodical, “hard look” globally at the practice of sending families of servicemembers abroad, where they could be danger.

“If we were ever to have a conflict with Iran, those noncombatants would be at high risk,” Milley said at an online event hosted by the U.S. Naval Institute, a private, non-profit, professional military association.

“The situation with North Korea, if something were to happen, then we would have a significant amount of … U.S. military dependents in harm’s way. So I have a problem with that.”

Milley said he had no problem with U.S. military servicemembers being put in danger, adding that was part of the job of the U.S. armed forces.

“But taking a hard look at our permanent overseas infrastructure, which includes families overseas, I think it’s time we take a hard look at that,” Milley said.

Randall Schriver, who was the Pentagon’s top Asia policy official earlier in the Trump administration, said Seoul would not welcome any decision to pull U.S. military families from South Korea.

“I think it would be perceived negatively in the public and with national security professionals,” Schriver said.

“There’s not a lot of enthusiasm to do what I just said, but I do think that’s necessary,” he said.

These researchers spent months on a remote island with no TV or cell service. Now they’re returning to a different world.

(CNN) — They may be some of the last people in the world to be touched by the pandemic. A