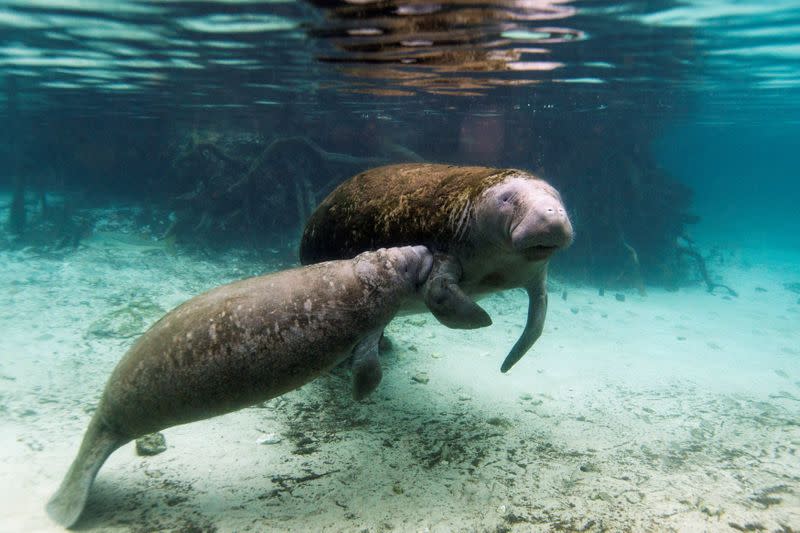 NAPLES, Fla. (Reuters) – The U.S. Fish and Wildlife Service has opened an investigation into the harassment of a manatee which was found in a Florida river with the word “Trump” scraped into its back, a local newspaper reported on Monday.

The injured manatee was found on Sunday in the headwaters of the Homosassa River on the state’s west coast, about 100 miles (160 km) west of Orlando, the Citrus County Chronicle reported.

A spokeswoman for the U.S. Fish and Wildlife Service did not immediately return a request for comment.

The Chronicle published a video showing an underwater view of the slow-moving mammal, with the word “Trump” etched in big letters into its back. The manner in which the letters were engraved was not immediately clear.

The Tucson, Arizona-based Center for Biological Diversity on Monday said it was offering a $ 5,000 reward for information “leading to a conviction for the cruel and illegal mutilation.”

“It’s clear that whoever harmed this defenseless, gentle giant is capable of doing grave violence and needs to be apprehended immediately,” Jaclyn Lopez, the nonprofit group’s Florida director, said in a statement.

Manatees, nicknamed “sea cows,” are protected under the Endangered Species Act, according to the Fish and Wildlife Service’s website.

Harassment of a manatee is a federal offense punishable by a fine of up to $ 50,000 and/or up to one year in prison.

'Unfair' tampon tax to be scrapped across Australia after approval from states, territories

The deplatforming of President Trump

After years of placid admonishments, the tech world came out in force against President Trump this past week following the